Experienced our first properly child-free day on Saturday. An odd experience, as we prepared handed over Louis to the care of his grandparents.

Spent the early part of the morning trying to pack for every eventuality. I was convinced I had forgotten something important. Check bottles, baby milk, nappies, clothes, nappy bags, etc. I keep having to remind myself that they have had over 32 years more experience at this than I do.

They trotted off early with the pram enjoying a sunny day out in East Lothian. We received some photo messages through the day reassuring us that he was happy and cared for.

So with the wee one safely packed off, and 8 hours of quality time, what did we do?

Some last minute shopping for Kate's birthday, as the intended present of a Wii Fit turned out to be nowhere to be found in the land. (didn't the short supply trick also work nicely to Nintendo's advantage when the Wii itself was first launched)

Kate caught up on her first aid course with the Red Cross. I popped in later to offer a helping hand, then later a helping wrist and elbow. Which were in turn cut, broken and scalded. Caught up with the people training at Red Cross which was really nice.

We have both lost touch with many people over the years, as they start to drift away from volunteering projects because of lifestyle changes - jobs, family etc. Easy to do as life becomes busier and time is at a premium. There are so many things to keep up to date with, and it could easily take a lot of time. So it seemed important when Kate got a chance to catch up with first aid qualifications. It gives us a chance to keep those contacts going.

Not so nice was the moment of doubt and slightly embarrassed silence, when at the end of the day I was asked: "so when did you last attend a course yourself?"

I think I may need to pop along for the next course that comes up. Otherwise I might turn out to be a casualty of qualification apathy too.

I've been posting a few things in different places online, including typepad, and flickr. You can track a combined list at friendfeed/digitalsean

“Louis nearly lost both parents in J&R, while looking at small laptops. OQO, Asus eee-PC, HTC shift and a little HP too.” Wednesday at 3:01 pm
update: also looking at some interesting presentation devices which I've bookmarked on delicious/digitalsean

Twitter “Driving across Florida like a mad astronaut. We even have nappies (for Louis)” Thursday at 7:48 pm

“joined rezed - a social networking space for SLED members and others interested in education using virtual worlds http://rezedhub.ning.org” April 29 at 3:53 pm
update: Barry corrected me - the official URL is http://www.rezed.org

posted a blog post Going offline for travel with Window Mobile on digitalsean@typepad Tuesday at 10:29 pm

“having a unix tweaking morning - rss + flickr elgg, crontab; git to track moodle development and make it easier to merge our customisations”

We took a trip out to the Kennedy Space Centre. Had one busy morning driving across the state like a wronged astronaut, we even had the nappies (for Louis).

Bit disappointed that the Shuttle launch STS-124 was pushed back from 24 April to sometime late in May. We even missed the roll out to the launch pad by a couple of days. But had a good day anyway with a bus tour round the site.

Walking around the real rocket garden showed how much work has been put in to the virtual space centre in Second Life. The replica of the rocket garden is really well done.

Spent the next day floating around playing with Louis in a mini-water park attached to our hotel.

On holiday and having breakfast by the dock in Treasure Island, FL. I'm catching up with holiday photos and playing with Louis, while Kate catches up with her blog. On Monday we fly to New York and will be there for a week.

Training for the summer school programme has been going well, and covered a lot of material with the summer school teachers. We started creating new avatars and looking at appearance and clothing. Moved on to building and even some basic scripting. Final day yesterday we started to try animations and making a musical sculptures by uploading and scripting the sounds into piano keys.

Useful meeting in the afternoon where the second life trainers were brought together with some of the other people involved in the the summer school programme including Josephine and Dan along with people who work for the Patel Centre composing music and working with young people using music and digital media. It's a much more organic process than a conventional performance course, taking ideas from the young people in the course and sharing and building on them. It seems that everyone is enthusiastic to see how we can bring the different skills and techniques together in an interesting way, and having a series of multimodal performances in the real and virtual worlds.

The first lot of pictures are up and online. 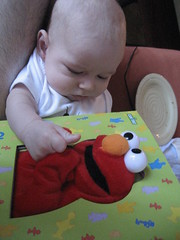 Having fun in florida, even though because we are spending lots of time relaxing with Louis in flat, and catching up with things online. I have been starting to interact using digital media again. I know that I been ignoring lots of blogs, email lists and all sorts of things, but had some time to catch up again. Being forced to think about going offline has helped.

So with any luck I should get round to answering emails, posting more pictures, blogging and catching up with other people's blogs during this trip.

I've been playing with another blog for notes about software, mobile phones and educational technology. The personal stuff -- Louis, photos, friends etc will probably continue over here on LiveJournal.

Typepad have a really nice mobile blog client, and I had been tempted to try out their service.

In case this moves later, the new blog feed is on feedburner as http://feeds.feedburner.com/digitalsean

I'll get a composite RSS feed sorted out soon.

Feeling a bit tired after first week back at work. Need to figure out this working, taking care of baby and sleeping thing. I'm sure they are mutually exclusive and that only two out of three are possible.

Had a great weekend though. Kate and Louis popped in on drinks after work on Friday, and had a chance to meet all of my work colleagues.

Stu, Chenoa and Locke's offer of lunch got us out of the flat on Saturday. Had a nice time catching up and seeing Dylan and Malina. Later popped in to a few of the sessions at BarCamp, and caught up with Vicky and Ewan Spence during drinks afterwards. Playing a few interesting card games which Ewan had introduced everyone to in Teviot.

Went visiting on Sunday. It's my Dad's 60th this week, and we had a family meal along with my sisters father in law who shares the same birthday. The big thing though was introducing Louis to Marion, who has now been promoted from granny to great-grandmother. 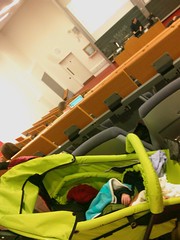 Louis goes to university. He appears to be a proper student already, and slept all the way through his first lecture at the back of Appleton Tower Lecture Theatre 1.

Kate and I have a new baby boy. Those of you following on twitter will already know that he was born 00:43 on Monday 14/1/07 weighing in at 4.1kg (9lb3). Sproglet and Kate are both well and came home on Wednesday night. Keeping on calling him Sproglet might look a bit odd on the school register, so we are naming him Louis Alexander Farrell.

Thanks for all the messages from everyone over the last few days, sorry that I have not replied to everyone directly.

It would seem that we have a few more hours to wait. Called in to the hospital, and they asked us to pop in. In for a checkup at the Simpson's maternity unit. Sproglet seems to be happy, but he might hold out for another 24-48 hours.

If you don't want to know the result , look away now.

Happy 2008. I had thought the only way wake up feeling bad on new years day was either to work all night, or to spend the night drinking prodigious quantities of alcohol, in what has recently been termed "scotland's national sport". It appears not - apparently you can get one being responsible and not drinking, simply by staying up late, partying a little and singing too much :)

Feel the need to get out and enjoy the start of the new year and blow away the un-hangover. So vaguely thinking about going to one of the galleries to see some art. The national galleries are open between 12noon and 5pm today are open today in Edinburgh or if anyone feels like doing anything, now or later ...

If not hope you had a safe new year, had fun and didn't do anything you regret
Collapse